The origin of the Department of Mathematics, Kyoto University originated with two research units in the Division of Science in the College of Science and Engineering, founded when Kyoto Imperial University was established in 1897. 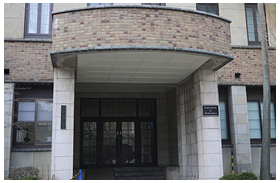 The Department grows drastically with the science and technology promotion policy of the government since 1963 and consisted of 10.5 research units in 1967. In 2003, 14 staffs were transferred from the Faculty of Integrated Human Studies and the Graduate School of Human and Environmental Studies. Since then, the Department is the responsible department on mathematics courses in Liberal Arts and General Education Courses.

The Department of Mathematics was originally placed in a building on the west side of the Clock Tower with the Department of Physics, and moved to a new building (the South Wing of the Building no. 3 of the Faculty of Science as we know it today) in the North Campus in November 1934, just after Muroto Typhoon hit Japan.

The quaint Building no. 3 was a film location of the 1983 Japanese film "Antarctica". The fiscal year 2006 was devoted to a large-scale aseismic retrofit because of lack of earthquake-resistance. Although there were major changes including the installation of an elevator and the relocation of the library from the third floor to the first floor and the underground floor, the appearance was mostly kept unchanged.